Historically, not very many men would become Personal Support Workers but their numbers are on the rise. More recently, there are many men who are joining this profession.

In the past, nursing duties were relegated mainly to militant and religious sectors, both of which were male dominated.

Gender stereotypes have been suggested as to one reason why there aren’t many men in the field. Women have been seen traditionally as nurturers and caregivers, but these social norms are changing as more men are coming on board.

The American Assembly of Men In Nursing is an organization dedicated to supporting and encouraging men in the healthcare field.

It was started in 1971 by a man named Steve Miller.

Miller was a nurse who, along with other male nurses, thought it was time to get together as a group to gain support for men in the field. Over the years this group flourished and it is in part to organizations such as these that more and more men are joining the healthcare team. 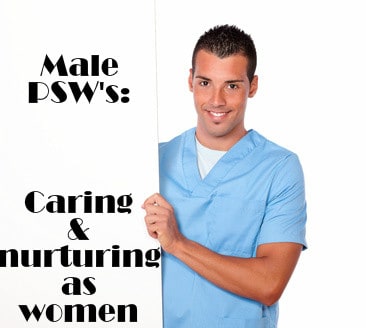 Another reason why men are becoming PSWs, other than the obvious fact that it is a fantastic job is to springboard into the healthcare field.

Many PSW’s, men included, go on to further their schooling to become nurses or even doctors.

People who are new to the country often look into PSW work as it is a relatively short program and the job options are immense. The pay can far exceed other professions with the same amount of education.

THE PERFECT MIX
Diversity in the work place – whether it be race, culture or gender – is never a bad thing. Working with the same sex all the time can tend to be… well, difficult.

Working in an environment with a mix of male and female PSW’s encourages professionalism.

You get different viewpoints on situations and different ideas when dealing with issues.

From the resident perspective, having a few more manly faces around isn’t such a bad idea either. For instance, some male residents would be far more comfortable discussing any issues they may have with someone who could understand better than a woman would.

Male or female, personal support workers are in high demand and will be as long as we have ageing seniors with illnesses who need our help.

Whether you are becoming a PSW to spring board into nursing or you genuinely love the field, this is a great profession.

Men are just as caring and nurturing as women.

On this page, you can find anything there is to know about how to become a personal support worker, how to succeed as one, and how to continue your education. This is the place to come to and look for all the PSW resources and information that you may need on your journey as a Personal Support Worker.

If you’re determined to pass your next PSW interview with flying colors, we’re here to help. PSWHQ have put together a thorough online guide with PSW interview questions and appropriate sample answers to these questions that hit the target, and are concise and supportive.

Performing well in the interview is just one part of many others needed to secure a PSW Job. First and foremost, you’ll need to have an impeccable résumé and cover letter in order to be called for an interview.

After you have decided to become a Personal Support Worker and completed the course you are now at a point to start looking for work. It is important that you explore all the jobs listed under different job titles, which is why you should go through our ultimate guide to finding PSW jobs.

Over the past few years, PSWHQ has achieved a dominant ranking in major search engines such as Google and Bing. As a result, we offer a limited number of advertising opportunities to individuals, colleges, companies, and organizations we see as a good fit for the unique audience of PSWHQ.